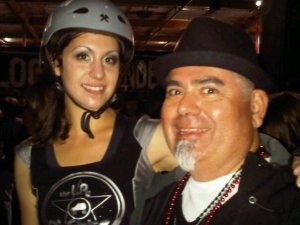 It was “Ladies Night” last night in Los Angeles. Well, at least for the LA-Riettes, the NY Gotham Girls and their fans at the LA Derby Dolls bout in Historic Filipino Town (AKA Downtown LA.) From start to finish, it was a perfect night out. I thoroughly enjoyed every minute of it. Beginning with the feelings of anticipation and excitement of experiencing something new to me in my hometown to the satisfaction and joy of spending some much needed quality time with my family and friends. The evening turned out to be more than I had hoped for!

I knew I would have fun. I love trying new things. I wasn’t sure if Lito, Jonathan and Jennifer would like it. But I had a feeling they would. I was happy that no one was disappointed. Making plans for the four of us to go out on the town isn’t easy. Our schedules swirl around the activities and social lives of our teen and tween children as well as our individual commitments and interests. The plans were laid so far in advance, I wasn’t sure if that was a good or bad thing. Any one of us might have had to drop out. Making arrangements for all the kids in order for us to be someplace on time is a bit of a challenge as well. And money is always an issue. It’s never fun going out with empty wallets. The weather forecast was not on our side. Not just heavy rain and extreme cold, but snow and hail were expected! Fear of the unknown always sets in for me when trying something new. What was it going to be like? What should I wear? How long will it take to get there? Knowing my way around the city, I had an idea of where the Doll House was, but I am not very familiar with that part of town. Was it safe? Besides watching Roller Derby on TV with my Nana over 30 years ago – I knew nothing about it! It truly was an adventure. 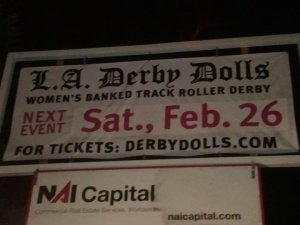 Thanks to our long time friends come Facebook buddies, Dani and Petra, I accepted an open invitation to join a large group organized by Dani to get VIP seats in a reserved section to see the L.A. Derby Dolls All Star Ri-ettes take on New York’s Gotham Girls Roller Derby at The Doll House on February 26, 2011. Lito thought it would be fun and we invited my brother and sister-in-law, @Jennifer-Jonathan, who were as excited as we were to check this out. Navigating the traffic from the Valley and arriving a tad late, we found a packed venue with not a parking space in sight. After unsuccessfully trying to bribe the gate security bouncer dude to let me park in the LAPD reserved spot – my very “live by the rules” husband suggested parking in the strip mall parking lot across the street. I parked right under a sign that said “No LA Derby Dolls Parking.” I was certain my Jeep would be towed away and I’d be stuck in the rain with the first three people I would call in such a disaster! Then, we broke another big no-no in Lito’s book. . . we jay-walked! I couldn’t believe it! The first time in 27 years knowing him, he didn’t make me walk the extra block to the light to cross the street! At this point, I knew Lito was as excited as I was to get in and see the Roller Derby! This was going to be fun! My husband was being a reckless bad-boy!

Walking up to the venue, we could hear the loud cheers and feel the energy that was rocking the building as the crowd went wild. The first quarter had begun as we made our way to the only open reserved seats in the arena. Dani and Petra and their crew were all seated and watching the match and had saved the best seats for us. Second row, center of the action, on the aisle! Unbelievable! My sports enthusiast brother was in Heaven! I was happy to be able to sit down as I noticed our seats in the bleachers were in the one section that actually had seats. Yes folks, almost the entire arena of fans were standing for the entire 3-hour event. And the place was full!

One of the most impressive elements of the experience for me was the entertaining announcers. Knowing very little about the sport, I felt comfortable with their explanations of the super fast action and immense knowledge of all the players. Evil E and Blaine Capatch, with their radio-voices, timing, humor and expertise made it fun to pay attention and helped to make it a very enjoyable game to watch. 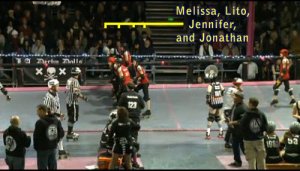 The warehouse building venue was pumped full of energy, clean, organized, well managed and every bit as professional as the likes of the Staples Center or Dodger Stadium. Only much smaller and run entirely by volunteers! The lighting, big screens, music, sound, ticket line, seating, security, even the food, drink and swag vendors were all top notch. I enjoyed my Hot-dog-on-a-stick and canned Tecate beer with fresh lime almost as much as a Dodger Dog and large Miller Lite or Garlic Fries and Hefeweizen from the “gourmet grille” at the large stadiums. Especially satisfying was the fair prices of the food, drinks and merchandise. You actually got what you paid for!

Everyone was friendly and nice. The players volunteer at the ticket and merchandise counters and you could tell how grateful they were to cater to the masses. I never experienced anything like that before. Everyone who worked there seemed as happy and excited to be there as I was. The fans of the LA Derby Dolls were awesome! There were definitely some die hard fans there amongst the friends and family of the players, trendy LA club types, and thrill-seekers like me. It was the place to be! Popular enough to be smooth and precise, yet still fresh enough to be edgy and cool. It definitely was a party atmosphere. Many fans were devoted to the visiting team from New York. The sign waving, team T-shirt wearing, roller derby enthusiasts cheered on their favorite players from both coasts.

The competition was tight. The score was close at times. The visiting team had never competed on a banked rink, but you would never have known that. They were tough to beat, but the home all-star team, the LA-Riettes whipped them. These girls are hot athletes! They skate fast and hard. It’s a brutal physical sport. More than half the team was in the penalty box for most of the bout. Two players were kicked out of the game for too many penalties! The refs worked hard. With names like Charlie Frown, Roger Assaultrey, and Gia De Los Muertos – there was no messing with them. The “Game Executioner,” Hurtin’ Ernie took no pains to stop the action. The ladies weren’t out to hurt each other, but the blockers, blocked and the jammers jammed! Getting elbowed and knocked down, even hurled over other skaters, is part of the game. It was very exciting to watch. Every time a player went down, she got up smiling and waving to the fans. Each bruise was worn with pride like true gladiators, taking part as much for the love of winning as for the pure enjoyment of the applause and cheers. 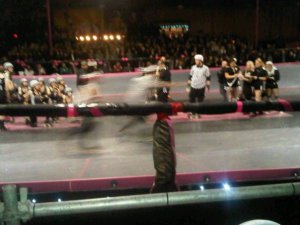 The experience was everything a perfect night out should be. Enhanced by being with great company, attending an entertaining and enjoyable event, and enjoying a flawless execution (My bad-boy husband did end up moving the Jeep at half-time) I am savoring the memories, completely pleased with the adventure of trying something new and different. Like a teenager after a first concert, I happily still wear my yellow bus neon green wristband with pride. I am now officially a Roller Derby Queen! 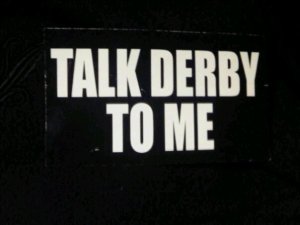 "I commit my passion to my cause, knowing that passion is the power that creates new life, new joys, and new accomplishments for myself and others." ~LBJ

My Wax Begonia is flourishing right now! She likes the cold I think. I water under the leaves about once a week. I almost lost her this summer. Thanks to Allison for this beautiful birthday gift that keeps giving me so much joy!
Happy Thanksgiving from the Reyes family! We hope y’all enjoyed a wonderful day! We are grateful for our family and friends near and far!!
Happy Thanksgiving to all my dear friends and family! I am grateful for you all!! Have a wonderful day!
It’s great looking across the table at these two! Fun dinner at Cork & Barrel Pub where you can get a bacon burger au flambé! @corkbarrelpub #atx #roundrock #texascuisine #yum #love #4u #baconcheeseburger #irishpub #cheers
My Tweets 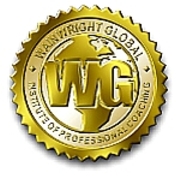 A Woman Of Independent Means by Elizabeth Forsythe Hailey
My rating: 4 of 5 stars

I read this book for the first time as a young girl and loved it. I was asked what inspired me to be a writer, and I thought about how I read a book once and never forgot it. I was pleased to love it just as much after reading it again thirty years later.
A Woman of Independent Means is a story told in a series of letters and correspondence over the lifespan of an average, yet brilliant, young American woman. It goes beyond a coming of age novel. Through her letters, we learn how to read Bess’ thoughts and we realize her inspiration and motivation as she navigates through life.
The coolest thing about rediscovering this book now is that there is an updated preface in new edition that Elizabeth Forsythe Hailey wrote in 1998. She was close to my age when her work was first published and she wrote it while raising her two small daughters. She says that “the traditional advice to writers is to ‘write what you know.’ I always amend that to ‘write what you can imagine knowing’.” I feel as though she is speaking directly to me and it is at this moment in my life that I needed to hear these words from the woman who first inspired me to write so long ago.
https://mizmeliz.com/2012/02/27/writin...


View all my reviews

“This is the Sound of My Soul”